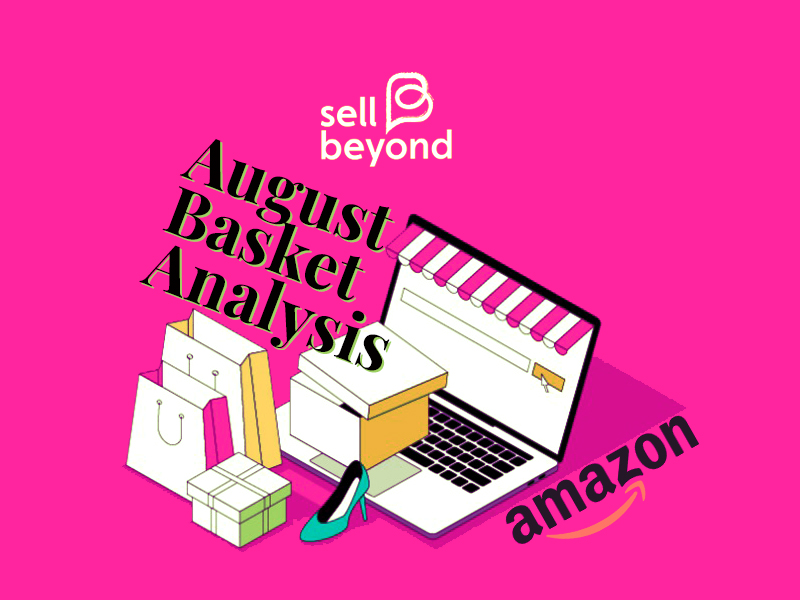 Summer is out and school is back in action! Amazon users across Europe aren’t looking to catch rays in the paddling pool anymore – they’re searching for stationery, backpacks and water bottles…

Or rather, the lovely weather is beginning to fade, Autumn’s on the door and we need to be prepared for school and work come rain or shine.

What is our Amazon Basket Analysis?

Just like Google Trends, we can look at the most searched-for items on Amazon. This data can help you improve your listings, consider new product launches and increase your profit margins.

We took a look at the top search terms and notable trends on Amazon for the top European economies. Take a look at our May, June and July blogs to see how searches and trends performed month to month.

At a Glance:
Back to Back: Europe’s most searched for items in August

What were the most sought-after items in the UK on Amazon in August?

Trending in the UK: Study and Work Essentials

We saw a turn in search habits, with shopper’s priorities shifting towards the end of August. Customers stopped searching for paddling pools and fans in the last week of August for desks, backpacks, water bottles and pencil cases!

The pencil cases are likely to be parents searching for their kid’s school supplies, but the rest is up for debate: whether the popular searches are due to schools, colleges and universities opening up or the influx of people returning to work, thanks to Boris Johnson’s incentive to get people back in the office? It’s likely a mixture of both.

With desks ranking at the 20th most searched for item on Amazon in August (10th most searched in the last week of August) consumers flocked to this desk. It’s interesting to note the title contains the words ‘folding’ and ‘no assembly’. A no-assembly-required home desk? No wonder the UK is focusing on this product!

British Amazon users are returning to the office and school and need hydration: these steel water bottles were the most clicked-on item when Brits searched for water bottles. It’s likely these aren’t for people working or studying from home, as they are more for hot drinks; it’s a lot easier to depend on your trusty kettle when you’re at home, after all.

True to taste last month, the UK is still buying gin on Amazon, the most clicked on listing being Gordon’s Sicilian Lemon as people try to savour the last of the warm summer days in their gardens and avoid busy restaurants and pubs.

What were the most sought-after items in Europe on Amazon in August?

Across Amazon France, Germany, Spain and Italy, there was a sharp shift in the shopping baskets of Amazon customers continent-wide in the last week of August. A lot of Amazon searches turned to refreshing the office and obtaining study essentials.

No smartphones? France and Spain seem equally keen on looking for paper-based organisers as both countries searched for agendas to cover 2020-2021, ranking in both countries as the 9th most searched for item on their Amazon sites. This is a likely buy for children needing to organise their school year and homework timetable.

A firm favourite among teenagers, children and adults alike, backpacks were one of the most searched items across the continent last month. Reaching its popularity due to schools and workplaces slowly opening around Europe, backpacks were likely boosted from day travellers looking to use up the last of the weather.

Germany and the UK were the most generic searches, looking for ‘rucksack’ and ‘backpack’ respectively, while France and Italy opted for the Eastpak brand when searching, with ‘Eastpak’ ranking at 28th for France and 25th in Italy for August. Looks like France and Italy are big fans of the classic American brand when it comes to fashionable accessories!

Although searches for fans are petering off in the UK – not even ranking in the top 100 searches for the last week of August – fans were the 2nd most searched for item overall for August. Predictable as the moment the UK gets hot weather it’s gone before the fan gets delivered!

This tells us the volume we were ordering fans in early August was so high, it didn’t matter if fans were only ranked at #285 for week 4!

Fans in the UK

The rest of Europe continued to shop for these items, with temperatures across the continent still in the mid-20s. For the first two weeks, the French had fans ranking as their number 1 search on Amazon, with fans slipping down to #62 in week 3 and #242 for week 4 just like the UK.

Headphones have been among the most regularly searched for products on Amazon across Europe. This is largely due to their flimsiness and the ever-changing port compatibility (famously when Apple ditched the headphone jack in the iPhone 7 for a lightning connector). Bluetooth headphones are now the name of the game, with variations like ‘airpods’, ‘wireless’ and ‘in/over earphones’ searched for on Amazon.

Wireless, standard and Bluetooth headphones ranked in the top 15 for each country’s basket we analysed: #15 in the UK, #5 in Spain, #4 in Germany, #1 in Italy and sneaking in at #20 in France. France was the only one to use the Apple-branded AirPods to search for their wireless headphones.

Throughout this Summer’s basket analysis, Italians have been determined to buy an electric scooter. In August, electric scooters were the 4th most searched for item across Amazon IT.

But the plot thickens – we noticed a spike in searches for electric scooters over in Spain this month, only just missing the top ten. Ranking in at 12, Spaniards have caught the metropolitan scootering bug. The French, too, have caught wind of the latest way to travel. Electric scooters ranked in at the 15th most searched for item Amazon FR last month.

So… how did we do with our predictions?

Did our predictions match the results for August?

We were right – as creatures of habit, Brits were still searching for gin on Amazon. It seems even with a dine out to help out scheme, a lot of the country, given the social distancing measures, are opting to stay at home and indulge in creature comforts.

What do we expect for September?

We expect to see a similar result for school and work equipment such as planners, pencil cases and desks across the continent as schools and offices begin opening.

We predict in the last few weeks of September we will see a new kind of face mask crawling up the searches… scary Halloween masks!

For more information about basket analysis or how to perfect your Amazon account so each of your customers’ trolleys are overflowing with your products, take a look at our YouTube channel for useful tips and tricks.